Just added to your cart

How Does an Acupuncture Pen Work? The origin of acupuncture pen

Electrical stimulation for pain control was used in ancient Rome, 63 A.D. It was reported by Scribonius Largus that pain was relieved by standing on an electrical fish at the seashore. In the 16th through the 18th century various electrostatic devices were used for headache and other pains. Benjamin Franklin was a proponent of this method for pain relief. In the 19th century a device called the electreat, along with numerous other devices were used for pain control and cancer cures. Only the electreat survived into the 20th century, but was not portable, and had limited control of the stimulus. Development of modern TENS unit is generally credited to C. Norman Shealy.

The first modern, patient-wearable TENS was patented in the United States in 1974. It was initially used for testing the tolerance of chronic pain patients to electrical stimulation before implantation of electrodes in the spinal cord dorsal column. The electrodes were attached to an implanted receiver, which received its power from an antenna worn on the surface of the skin. Although intended only for testing tolerance to electrical stimulation, many of the patients said they received so much relief from the TENS itself that they never returned for the implant.

A number of companies began manufacturing TENS units after the commercial success of the Medtronic device became known. The neurological division of Medtronic, founded by Don Maurer, Ed Schuck and Charles Ray, developed a number of applications for implanted electrical stimulation devices for treatment of epilepsy, Parkinson's disease, and other disorders of the nervous system.

Today many people confuse TENS with electrical muscle stimulation (EMS). EMS and TENS devices look similar, with both using long electric lead wires and electrodes. TENS is for blocking pain, where EMS is for stimulating muscles.

Acupuncture Pen is basically a smaller version of the TENS machine used by hospitals to provide drug free relief and pain management of severe and chronic pain of minor injuries. TENS is an abbreviation of a proven medical technique called Transcutaneous Electrical Nerve Stimulation.

This device works by using a low frequency (1-2Hz) stimulator fed by quartz crystals so no power source or batteries are required. You simply hold the pen against the point of pain and press a button, you will receive a small electrical impulse, this impulse then travels to the brain via nerve pathways and the brain responds by producing endorphins, a natural defence the body uses against pain. In many cases the Pain Away pen will promote pain relief almost immediately. Repeated treatments act cumulatively so more severe conditions may be treated over a longer period of time.

Acupuncture Pen can be used to relieve backache, shoulder pain, arm and leg pain, headache and migraine, tennis elbow, sports injuries and sciatica. It has no harmful side effects and can be used as often as required. It impossible to "overdose" and can even be used through light clothing. Research has also shown that stimulation pens can also be used for non-invasive acupuncture for the relief of many every day conditions such as tired eyes, toothache, fatigue and even a hangover.

Features of the device

Continuing, the function of the penrelief device is reflected in its features.

Here are some features for Acupuncture Pen, based on Chinese Medicine - meridians and acupuncture points

Treatment principle of  Electronic Acupuncture Pen  is used by electrical pulses to to stimulate acupuncture points then to activate cell and dredging the channel, while there is a condition to generate the electrical pulse, that is, current's positive and negative poles must be turned on. The pen is a monopole current(the nib) output, so the other pole current should be conducted by hands and form circumfluence with the nid of the  Electronic Acupuncture Pen ,so that it will produce electrical pulses. So it is normal to feel a little numbness of the holding hand, it is how the meridian pen works, not quality problem.
Electric Acupuncture pen Specifications: 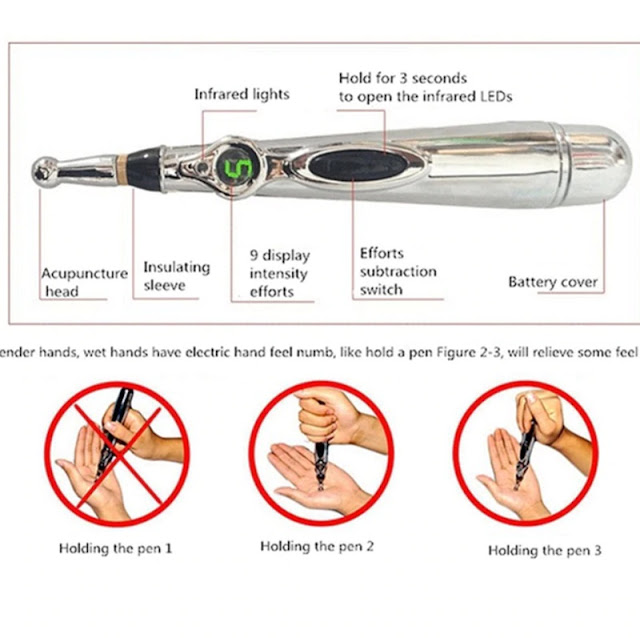